Ok when you are out of town you want to experience the flavor of the area, right? One of the last things I want to do when I’m away is cook. And since my blog is kinda foodcentric I would like to share some of the interesting places we went to eat while we were in LA.

First, Jerry took us to Bru’s Wiffle a waffle joint right in the heart of downtown Santa Monica that serves all kinds of interesting waffles, burgers, salads and more. Everything is made from scratch and the portions are huge so bring your appetite! We had chicken and waffles, Bru’s favorite breakfast and a breakfast burrito all VERY good and an amazing drink called the Sunrise, which was a combination of fresh squeezed orange, grapefruit, and carrot juice with a hint of ginger. A wonderful way to start the day. We would definitely go back! 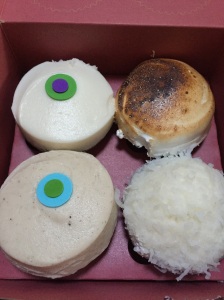 Next we took a little trip to CBS Studios and watched the taping of The Late Late Show with James Cordon, so much fun! Then we ended up at The Grove and went to The Cheesecake Factory for dinner, everything was great, absolutely  delicious!  Of course, I had to have some cheesecake, you can’t go to the Cheesecake Factory and not have cheesecake, right? I ordered the turtle cheesecake, it was worth all the extra calories! And while at The Grove we had to pick up a few cupcakes for later at the iconic Sprinkles. We ordered the green tea, the chocolate coconut, the s’more, and chia cupcakes.  I must admit, they were all wonderful but my favorite had to be the chia cupcake, of course you know I am addicted to chia!!! 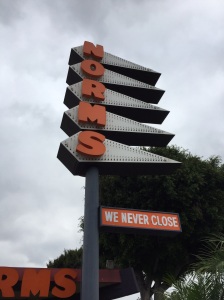 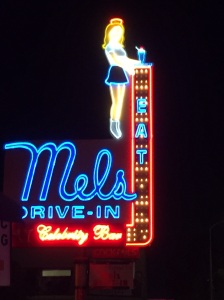 The next morning we were heading to Fox Studios for Jerry to give us a tour, so we stopped at Norms for breakfast, a down home diner kinda feel. Speaking of diners, we went to Mel’s Diner, one night, after strolling on the Hollywood walk of fame, it seemed fitting! It felt like we were transported back in time! I am not a huge burger fan but I ordered the sliders and the one made with the grass fed beef was amazing! 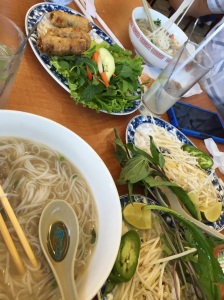 Ok I had heard of Pho, a Vietnamese comfort food, on TV and it was one of my goals to find some out here on the west coast. I have never had it, and all I knew was that it was some kind of noodle soup. Now Jerry and Scott are not quite as adventurous as I am when it comes to trying new foods, so I kinda had to put my foot down! They are pushovers when it comes to me, so I got my way and we went to Pho So 1. It was everything I had hoped for, fresh, delicious, and comforting.  The guys even had to admit they enjoyed it and would eat it again. Yummy, I wish I had some right now! Then off to the La Brea Tar Pits for the rest of the afternoon!

So the next day Scott and I were on our own, Jerry had to work. We went out to find some adventure. We spoke to Elizabeth at the Brentwood Inn, she was awesome! Hooked us up with Uber and suggested a few things we could do. She also told us about a wonderful little restaurant, her husband owned, called Cha Cha Chicken. So we took Uber to the Santa Monica Pier and walked to Venice Beach. Met some amazing artists, bought some cool art, and spent some time people watching. As we were heading back, we were not sure where we were and we were getting mighty hungry! On a whim, we decided to turn and head down this random street, and to our surprise there it was…Cha Cha Chicken! A colorful beach shack with an island flare and wonderful Caribbean food! They are famous for their coconut chicken, yum! They have sandwiches, wraps, salads, and more. I loved the plantains and the watermelon Aqua fresca was so refreshing!

The next day we started off at an elegant boulangerie cafe called La Pain Quotidien. I absolutely loved it! Fresh bakery smells and wonderful atmosphere. They create their menu around seasonal, organic ingredients, which is right up my ally! The food was delicious, felt like I was in Brussels! We ended the day at the Hollywood Bowl with the LA philharmonic orchestra playing the Bugs Bunny symphony! What an amazing evening!

The next day we spent boogie boarding at the Santa Monica beach and strolling down Rodeo Drive. By the evening we were ready for some stick to your ribs kinda food and Scott suggested  BBQ. What? Do they even do BBQ in California? Well despite much joking we found one named Holy Cow and holy cow it was good!

One last place I want to mention is Barneys Gourmet Hamburgers in Brentwood not your typical burger joint. If you are in the mood for a really good burger and truffle french fries, go! You won’t be disappointed! 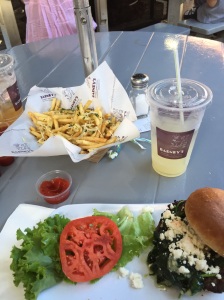