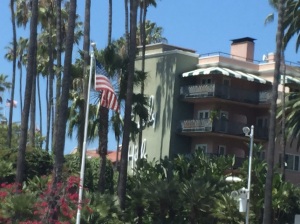 Last week we headed out to California! It was the first time for all of us. Well Jerry has been there since April, Scott and I where flying out to meet him. We flew SouthWest it was a long flight. We had a 3 hour layover in San Antonio and by the time we got there all the little airport shops were closing. Seems like they should stay opened when people are coming and going, what to do for three hours??? We made it! When we got off the plane we almost didn’t recognize Jerry, he had lost quite a bit of weight and had grown out his beard! I saw him first and even though I pointed him out Scott didn’t see him! We had made a pact to try and lose some weight and get in shape, it was working! So happy to see him!

The weather in LA was amazing! We had just come from hot humid Florida. Florida in August is almost unbearable, I like the heat but…I don’t like opening my door at 6:30 in the morning and getting a wet slap of humidity first thing! At this time of the year everything is struggling, even the plants, horses are sweaty, bugs are bad, there is a never ending load of laundry to do because you have to change out of your damp clothes so often! So it was quite a nice surprise to step out into 70 degrees with a light breeze and NO humidity! Ahh heaven. 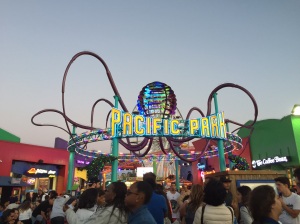 We were going to be in LA for ten days and what a ten days it turned out to be! We were staying at a cute little inn in Brentwood. The first day we ventured out to a place for breakfast called Bru’s Wiffle a Waffle House and we had chicken and waffles, delish! Jerry was our tour guide and showed us all around. We walked on Santa Monica beach, went to the pier, took a quick dip in the Pacific, went to the Pallisades. Tried to get our bearings. Growing up on the east coast it’s funny when you are in California because you feel like your always going in the wrong direction, the ocean is now to the west! I am a fan of interesting architecture and LA will not disappoint. You can tell it must be an architects dream to work in California. I don’t think there are two houses the same in any neighborhood. I loved the uniqueness of each place. Lots and lots of plants and interesting trees I am not familiar with. We got to tour a celebrities house and imagine how the rich and famous live. It was beautiful. So much fun, so much to see!

One of the most striking things to us was all the people. Now we are not from a big city, but there were people everywhere! And the traffic, omg the traffic! And parking…forget about it! To be continued…